Driving home from town, there she was. I hadn’t seen a wild turkey in years, but there she came, big as life right out of the woods. I was surprised because wild turkeys usually hide out the same as the deer. Also, she was by herself. When I have seen turkey hens before they were not alone and sometimes had a tom turkey with them. It reminded me that God’s wild creatures are all around me. Just because I rarely see them doesn’t mean they aren’t there. And those I do see, the many varieties of birds and the squirrels and even the pesky armadillos and smelly skunks, do I really see them? God must have thought them significant enough to create them. Maybe I should show a little more appreciation.

Did she hear the blasphemous words and see the blood and spittle on his body as he writhed in pain on the cross? Yes, she did. Was she there when her son cried out as he breathed his last? Very likely. Righteous Simeon foretold, “A sword will pierce your own soul too” (Luke 2:35). How awful for any mother to see her child tortured and killed, yet where else would a mother be. Mary and John standing there in tears among the crude, callous soldiers and the murderous religious leaders surely brought some comfort to our Savior. But, Sunday was coming! What happiness must have been hers when she heard the women’s report! May we all sense the joy she felt at the resurrection of our Savior. Though I don’t worship Mary, I am among those generations who call her blessed (Luke 1:48).

As I watched the pastor looking around his empty church, bemoaning an empty sanctuary, an empty choir loft and empty Sunday school classrooms, it reminded me of my own empty spaces during this pandemic. I thought of the empty spaces at my next family reunion—a dear cousin and another cousin’s son. When I next see my late husband’s sisters, only three of the four will be there. An older friend breathed her last on Good Friday. While the pastor will see his congregation return again, it may be a while before I’m reunited with my departed family and friends. But they’re not gone from me forever, because our Savior sacrificed his life to make it so. And he promised!

When they saw the empty tomb the women who stayed with him throughout his ordeal and death thought his body had been stolen. And, even after appearing to them and to others, their reports of his resurrection weren’t believed. Doesn’t it seem odd although Jesus’ disciples didn’t have a clue as to what he meant when he talked of dying and rising in three days, the religious leaders understood very well. Those who had him crucified put guards around his tomb for three days to make sure it wasn’t disturbed. Then, after hearing the guards’ experiences at the empty tomb, they paid them to lie about what actually happened. These men were not among those Jesus called blinded to the truth (John 9:41). In spite of their understanding, they killed him anyway. Yet, just as Jesus forgives each and every one of us, he died for their forgiveness too.

In our urban life today those not raised on a farm or ranch may never see an animal slaughtered, but in the time of Jesus, it wasn’t unusual. Jesus may have seen cattle, sheep and doves killed and sacrificed at the Temple as well. The Scriptures don’t tell us when he came to understand his own role as a sacrifice. Whenever that was, he must have viewed these bloody offerings in a much different way. I’m sure Joseph taught him how to slaughter animals as mercifully as possible, but no mercy would be shown him. He would be tortured for hours, physically and mentally, as the people he loved turned against him, cursing and spitting on him. Even his closest friends abandoned him. Though he was shown no mercy, he gave his life so all of us, including his Roman soldier killers, could experience the mercy he was denied.

He knew what it would mean. When he rode triumphantly into Jerusalem on that donkey, causing crowds of people to follow him, shouting his praises, he knew. This would be the last straw for the religious leaders. This would force their hand. Jesus had to die. Lazarus was their target as well. Both had to die. They couldn’t have this living proof of a divine miracle walking around or the one who had raised him from the dead. Lazarus escaped, but though Jesus had averted their murderous hands many times before, his time had come. God’s plan from eternity had to be accomplished. He had to die. Though they believed they were catching him by surprise, he wasn’t surprised at all.

As we look to Easter observance in a few days, my thoughts go to the significance of what our Savior has done for us. Yes, he died and was resurrected for our eternal salvation, but he also lived every day of his life on earth for us too. From the humiliation of being a helpless baby, nursing at Mary’s breast, wearing whatever they used for diapers back then, to being a curious toddler learning to walk to hormone-charged teenager, he experienced it all. He was fully human as well as fully divine. We don’t know much about his growing-up years, but we know he learned from what he suffered during that time. He was fully human. He bled when he scraped his knee. He learned obedience. He faced all the temptations we all face, yet for our sake, lived without sinning even once.

Spring in Texas is glorious with flowers: blue bonnets and orange and red paintbrushes along with vibrant pink redbuds in bloom. Even dandelions sprouting up everywhere look good to me after the drab bleakness of winter. But it’s also when our Texas snakes begin coming out of hibernation. Someone put a photo of a snake on one of the neighborhood sites asking what kind of snake it was. Most replied it was a harmless water snake, but one person said there are only two kinds of snakes, rattlesnakes and cobras. If it didn’t rattle, it was a cobra! I laughed, because that was how my mother felt too. No snake was a good snake to her. I know better, but have to admit when I see one, my heart rate climbs a bit. Love living in Texas but watching my step! 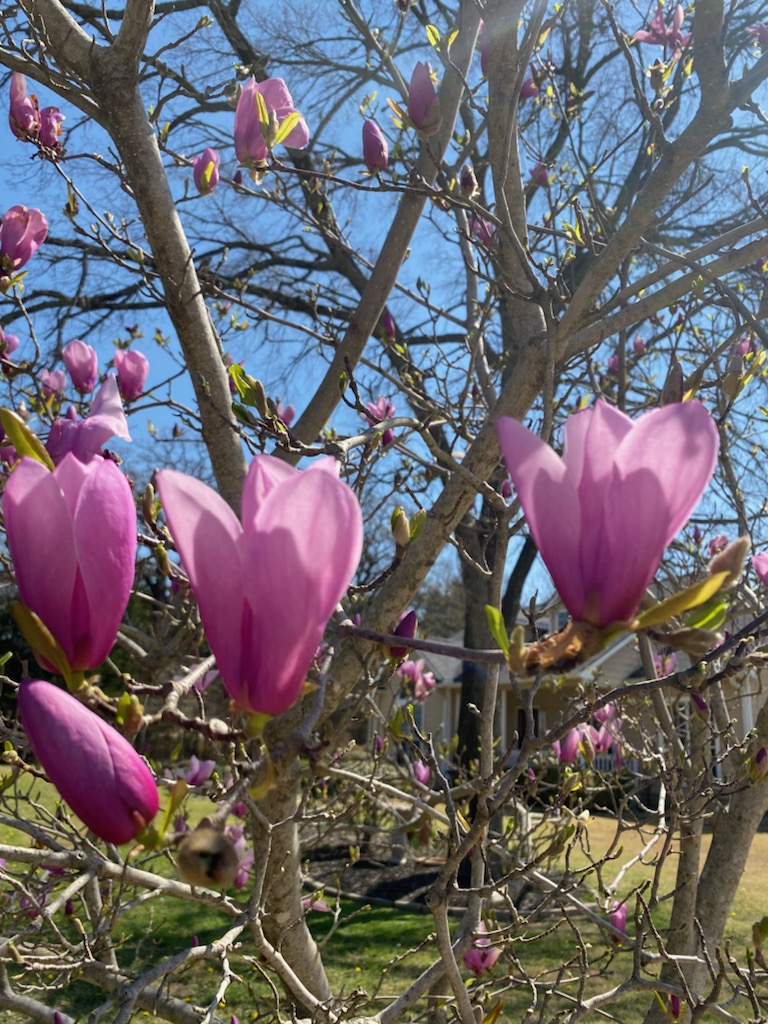 “You can cut all the flowers but you cannot keep Spring from coming,” wrote Nobel Prize winning poet Pablo Neruda. As I read his quote it made me think of all the Christian martyrs throughout the ages. From our Savior himself to the apostles to those persecuted Christians of today. And, of course, Jesus said it was nothing new, as he reminded the religious leaders of the killing of the prophets of old. When the light of God’s truth exposes the evils of those who live in darkness, murderous retaliation is often the result. But no matter the sufferings of the past, Resurrection Sunday came. Nothing, not even death, could stop Jesus from rescuing humankind. And, no matter the sufferings of today, nothing can keep Jesus from returning to finish setting up his Kingdom on this earth.

Knowing God from a Trinitarian perspective